For eight consecutive years, Lufussa has supported this conservation Project which has achieved in this period the release of 400,000 little turtles.

As a constant for eight consecutive years, the company Lufussa founded by the brothers Schucry, Luis and Eduardo Kafie, through its executives and their volunteers was present in the event of liberation of thousands of little Olive Ridley’s Sea Turtles in the beaches of Punta Condega, in the Honduran Gulf of Fonseca.

Official government authorities, the private sector and environmental organizations, as well as national and foreign media, came to this Pacific Ocean beach to witness an activity that has become a tradition in the south of the country and whose main objective is to populate the seas of this area this year with almost 20,000 newborn turtles to enrich the marine wildlife. 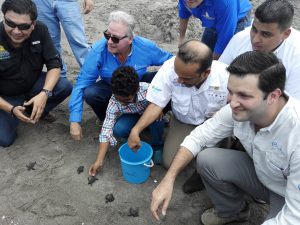 During 25 consecutive days the picking of turtle eggs with marketing purposes has been banned for local residents, who were mostly involved in the preservation plan that was carried out in the camps organized for this purpose in The communities of Punta Ratón, Boca de Rio Viejo, Cedeño, Carretales and Punta Condega, located in the municipality of Marcovia, Choluteca.

The contribution of Lufussa to this program for eight years has consisted of the preparation of 5 artificial incubation sites at the beach level, as well as the provision of a salary equivalent to food for work during the 25 days of egg collection in the Banned 40 fishermen selected from Punta Ratón, Cedeño, Boca del Río Viejo, Punta Condega and Carretales.

The company also contributes to the materials purchase, fuel acquisition, payment for specialized technical assistance during the sowing and incubation of eggs, birth of newborns, release and tabulation of biological data, among other activities to support the preservation of the environment in the southern part of the country.
Luis Kafie, founder of Lufussa, said that “the southern area, and especially the Gulf of Fonseca, has been a very special place for us as a company and as a family. We have practically coexisted with the marine species of this area, which has allowed us to see with concern the process of drastic decline in the populations of sea turtles and other species. Eight years ago we decided to support the Olive Ridley Sea Turtle Semi-Artificial Nesting Project coordinated by the Gulf of Fonseca Environmental Verification and Control Commission (CVC-Golf) with resources and logistics, which has achieved the release of 400,000 turtles at this date. We are proud to be a part of this achievement.”

For his part, Christopher Kafie, representing the board of Lufussa recalled that the love of his family to this area of Honduras “is given since the time of my grandfather Chito, who more than 80 years ago at a very young age began his business career as a merchant in what was the port of Amapala. He then made sure to teach them the beauties of the Gulf of Fonseca to his sons Schucry, Luis (my father) and Eduardo Kafie, whom I brought from small towns to the beaches of Cedeño, a tradition that we are now passing over to our fourth generation, our children”.Both Lufussa executives reiterated their continued support for this activity, as well as other projects of care and conservation of the environment at the national level.

Followon Twitter
Lufussa prepares for release 40,000 turtles in the Gulf of Fonseca

Lufussa Color Marathon 2016 was all a success
Scroll to top